I wrote this post in early 2017, it eventually came to be, and was utterly disappointing.

The 2016 election did not turn out the way that many in the United States had hoped. What is more concerning to me is that there seems to be a lack of people in the Democratic Party that are lighting a fire in preparation for 2020. And many have speculated that the party lacked a connection with the working class, leading them to choose a populist, Dorito-colored candidate.

I submit to you the beacon of hope that I think we all need for 2020: Howard Schultz, the Chairman and CEO of Starbucks that took the coffee chain from a handful of stores to nearly 25,000 locations worldwide.

He stepped down in 2000 when the company was killing it, and over the course of 8 years, the company went through a few CEOs who were unable to continue with the same level of success. Ultimately, when the recession hit, Schultz was asked to return, and within years, he turned the company back into the $20 billion annual revenue coffee chain that it remains today.

Here’s the thing: Schultz didn’t get a $14 million loan from his father to start Starbucks. He worked his way up from nothing. He grew up in the projects in Brooklyn, and after going to college on a sports scholarship, started working a low-level sales job and moved his way up, eventually discovering a small little coffee roastery in Seattle. Long story short: he ended up raising the $400k needed to buy the small chain, added an espresso bar concept to it that he discovered on a trip to Italy, and grew the stores into a nearly entirely corporate-owned empire. He’s a billionaire now.

Starbucks isn’t just a corporate coffee chain though: it’s one that has, from the beginning, set out to take good care of its employees, called “partners” because of their employee stock purchase plans (giving any employee access to discounted shares of Starbucks stock, something that I myself took advantage of to buy furniture for my first apartment in college).

They also provide healthcare to employees that work an average of at least 20 hours a week (well below the industry standard of “full time”), and Schultz kept that even when they were looking for opportunities to save money in the late 2000s. They offer tuition reimbursement. And Schultz has long advocated for same-sex marriage. In fact, Starbucks began providing benefits to same-sex couples well before many companies. It’s no wonder that that he was rumored to be Hillary Clinton’s choice for Labor Secretary.

Howard is passionate about unifying the country, if not the world (note the now-infamous, well-intentioned “Race Together” campaign). He used the pulpit that he had, the vast network of Starbucks stores, and while the appropriateness of the campaign has been debated, he tried. Imagine what he could do if he had a better opportunity to unite people.

He’s not perfect. His foreign policy experience is only from owning and operating stores in countries all over the world. He’s never held any sort of elected office before. But if the new America commands an “outsider” president that can “run the government like a business”, why not choose one that continues progress, truly champions the working class, and is actually a successful billionaire (never claiming bankruptcy, without family loans)?

Oh, and by the way, he recently stepped away from his day-to-day job of Chairman and CEO again, so he has 4 years to prep for this full-time.

So, if Howard becomes president, what does that mean for the United States? I can only speculate. I believe that he would truly be an advocate for the working class: raising the minimum wage and making health care affordable and accessible for all. And he’d bring a welcome feeling of unity to the country after 4 years of being torn apart, bringing together Americans of different economic classes, races, genders, sexual preferences… because that’s what he’s effectively done himself, and in the culture at Starbucks.

If this made you think that Schultz might be a strong choice for our 46th President of the United States, I recommend picking up Pour Your Heart Into It, his memoir about starting with nothing and growing the company that made him a billionaire. 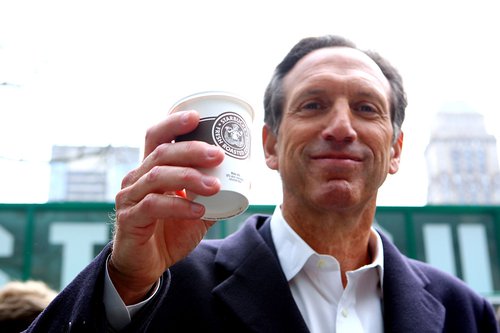